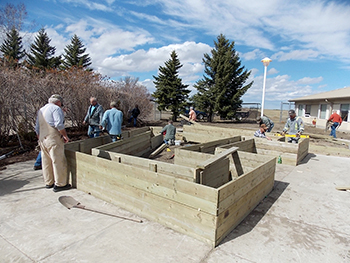 The Shaunavon Wildlife Federation is spearheading an effort to build and upgrade an outdoor patio area at the hospital’s long term care facility.
Members of the local Wildlife group were busy at the site over the weekend during a frenzied two days of construction, landscaping and cleanup.
“We got a lot accomplished this weekend and think it’s going to be a terrific area for residents and their families,” said Jim Wright of the Wildlife Federation.
Work at the site will eventually include the construction of a new 12’ by 16’ sun shelter, one of the centre pieces of the revamped area. New concrete, patio furniture, barbecue, underground sprinklers, benches, water fountain, raised garden beds and grass sod are also among the items being added to the site.
Workers also removed some old concrete to allow better wheelchair access to residents and staff who may want to tour the grounds or help provide care to the garden. An extra sidewalk, and the raised beds, will make it easier for residents to reach the plants from the wheelchairs or by standing.
Shaunavon Wildlife, an active community, volunteer-based organization, seemed to be a perfect fit for the project as it has the manpower and the expertise to handle the construction job.
But the group also approached other organizations and individuals to assist with the effort.
“Everyone we approached was more than willing to help out,” said Jim Wright of the local Wildlife Federation. “People wanted to get involved.”
Wright said the project ultimately benefitted from the generous support of a number of entities, including the Shaunavon Hospital Auxiliary, which donated $6,000 to the effort. The Cypress Health Region and the Shaunavon Care Centre – through a donor fund it administers – also made financial contributions.
The assistance, however, didn’t end there.
Equipment, materials and labour were also donated to the effort.
Employees at the Shaunavon RBC branch, for instance, agreed to provide some landscaping help.
The Shaunavon Co-op donated the lumber for the construction of garden boxes.
The Shaunavon Greenhouse donated a water fountain.
Mike Greenlay, of Leaf and Powder Enterprises, is setting up an underground sprinkler system at cost.
White Rock Trucking (Pete Illerbrun) and Jim Wright Backhoe also provided equipment and labour to the project.
Westland Concrete provided half of the concrete needed for the project free of charge.
Local contractor Josh Frederick made a huge contribution by helping handle much of the concrete work.
Shaunavon Wildlife members, meanwhile, have committed $10,000 to the project, not to mention its invaluable contributions of labour, materials and equipment.
The impressive sun shelter itself will cost an estimated $2,000.
“We’ve always asked people to support us and so this is a way for us to pay back to the community,” said Wright.
Crews also moved top soil into flower beds and into open areas. About 75 yards of top soil was used and more may be required. About 10 yards of gravel was also used.
Work at the site actually began Friday afternoon and continued all day Saturday and Sunday.
About a dozen members of the Wildlife Federation were on hand to provide assistance.
However, there are still some things to be completed.
For example, while the forms were set for the new concrete, it won’t be poured until the weather turns a little more consistently good. And the sod isn’t expected to arrive until sometime in May.
The new sun shelter will also be erected once the new concrete pad has been finished.
“It was hard work, but a lot of fun too,” said Wright.
“Hopefully, we’ll turn it into a nice area for families to relax and get together or have a barbecue,” he added. “We want to turn it into an area that everyone can enjoy.”
The garden site, which is completely fenced and measures about 3,300 square feet, is located just outside the dining area of the Care Centre. It can be easily accessed by residents, staff and visitors.
Shaunavon Wildlife plans to hold an open house and grand opening once the project is completed. The event, which will be open to the public, is expected to take place sometime in June.