Tribute show set to plug in at Plaza Theatre

Posted on October 27, 2015 by Shaunavon Standard 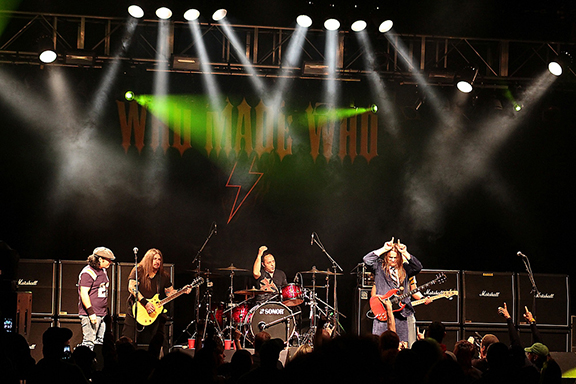 AC/DC is coming to Shaunavon.
Or at least a near-perfect replica of one of the world’s most prolific and well-known rock bands will be coming to the Southwest.
The Plaza Theatre will host a highly anticipated show on Oct. 28 featuring the AC/DC tribute band, Who Made Who.
Who Made Who replicates the full AC/DC concert experience from the early days with lead singer Bon Scott to the modern era with Brian Johnson.
This is more than just five guys playing AC/DC songs.
“We’ve spent years and years studying their performance and trying to be as accurate as we can,” said Scott Folkerson, a founding member of the tribute band. “We’ve studied their mannerisms and everything is replicated right down to their socks.”
Who Made Who tours extensively across Canada full time, and have earned a well-deserved reputation for delivering good, hard rock and roll to sold out venues across the country.
They continue to intensify their performances and are driven to reach the perfect reproduction of a live AC/DC show.
Their detailed presentation features everything from the sound, costumes, instruments, on-stage movement and even the speakers used by AC/DC.
AC/DC, formed in Australia in November 1973 by brothers Malcolm and Angus Young, are considered one of the greatest rock bands of all time.
The group has sold more than 200 million records worldwide – including epic records such as Highway to Hell and Back in Black – making them one of the world’s best-selling bands.
Back in Black alone has sold an estimated 50 million units worldwide, making it the fifth-highest-selling album by any artist and the third-highest-selling album by any band.
Back in Black – which was recorded as a tribute to the band’s lead singer Bon Scott who died after a heavy night of drinking – became their biggest-selling album and a rock n’ roll landmark. Hits from the album include “Hells Bells”, “You Shook Me All Night Long”, “Rock and Roll Ain’t Noise Pollution” and the title track.
Who Made Who, the tribute named after one of AC/DC albums and best known singles, was created more than a decade ago by five talented die-hard fans who collaborated to replicate the look, sound, and energy of an AC/DC concert.
The group is led by Folkerson on lead guitar (who replicates Angus Young on stage) and fronted by Dan Hunter (who performs as lead singer Brian Johnson). Other members of the tribute band include Joe Strub (rhythm guitar, Malcolm Young), Dave Huber (bass, Cliff Williams) and Bret Carrigan (drums, Phil Rudd).
Their shows range from small capacity bars to large concert venues, they also include Casino’s, theaters, night clubs, festivals, corporate private parties and benefit concerts.
“I get paid to travel and play guitar – there’s nothing better than that,” laughed Folkerson, during a recent interview with The Standard. “Canada is such a beautiful country and we get to meet a lot of great and amazing people.”
Folkerson says the band plays between 80 and 100 shows across Canada each year. They are currently on a tour that started in Ontario at the beginning of the month before moving out west. They were in Camrose and Lethbridge this past weekend, and have upcoming stops in Dawson Creek, Fort St. John, Grand Prairie, Saskatoon and Regina.
The concert in Shaunavon was arranged through a family connection – Folkerson’s girlfriend is a relative of Plaza Theatre owners Herb and Leslie Goldstein.
“It (the Plaza Theatre) is such a beautiful venue that we thought we might as well set up a show,” said Folkerson.
The band is based in the Toronto area. In more recent years, the group has travelled by airplane to many of its weekend gigs, although for this particular tour they have gone “old-style” and are driving across Western Canada.
Folkerson, who turned 40 years old just a few days ago, doesn’t plan to slow down anytime soon.
“I’m hoping to squeeze another 10 years out it . . . unless my body falls apart before that,” he chuckled.
For more on the band check out their web site at http://www.whomadewhorocks.com
Tickets for Wednesday’s concert are to be purchased in advance from either Andersboda, the Plaza Theatre or by calling 306-294-0175.