Posted on October 28, 2014 by Shaunavon Standard 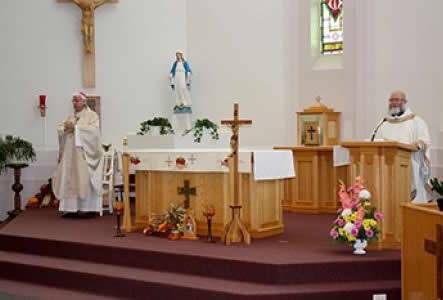 A good turnout of about 160 people turned out on Sunday, Oct. 19th for the 100th anniversary celebration of Christ the King Parish in Shaunavon.

“It’s a testament to the faith and perseverance of the people,” said Christ the King parish priest Fr. John Mock.

“But it’s also a testament to the community,” he added. “There are a lot of small towns in Saskatchewan that aren’t here anymore.”

The mass was led by Archbishop Daniel Bohan of Regina, assisted by Fr. John.

The special occasion also provided an opportunity for the Archbishop to bless the parish’s Ambry, which is used for the storage of the oils used in sacraments.

Parishioners later gathered in the church hall for an official program and supper.

The program was emceed by Gloria Illerbrun, the Communications Chair of Pastoral Council.

The event included a performance by the Christ the King School Choir, a few short presentations about the history of the church, and guest speakers Roger Paul (Vice-chair of Pastoral Council on behalf of Pastoral and Finance councils), Father John and Archbishop Bohan.

“It’s nice to be able to get together and celebrate the 100th anniversary,” he added. “But it’s also a celebration of people who have been here as well as to the future and going forward.”