Posted on November 4, 2014 by Shaunavon Standard 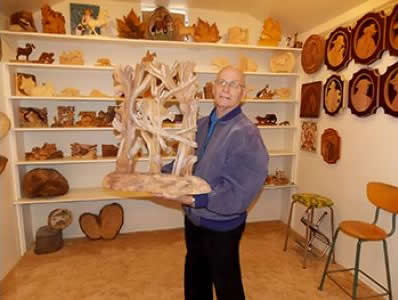 Talented Shaunavon artist Maurille Hammond has created a beautiful military wood carving that pays tribute to those who have served their country.

“It’s something I’ve thought about doing for a few years,” said Maurille. ‘I’ve always liked the idea of doing a piece to honour the soldiers.”

Maurille is a self-taught wood carver who has produced over 200 pieces of art.

The soldier’s carving, like all of his other art, was created from a single block of wood.

In this case it was a piece of Balsam wood that Maurille used to chisel the striking image.

The carving measures about 15 inches by 17 inches and is two inches deep.

Maurille spent the past month – working eight hour days – to create the extraordinary piece. He finished the carving last week, just in time for Remembrance Day.

“These pieces take a lot of time and a lot of work to create,” he stated.

The carving is inspired by a photo of soldiers that Maurille came across three or four years ago while searching the internet.

“This was an especially difficult piece because of the profile of the soldiers – with one on top of the other,” he explained.

While the carving was inspired by a photo, the bulk of the piece – including the Maple Leaf frame – was created through drawings and the imagination of Maurille himself.

Maurille is a well-known artist in the area for his exceptional artwork. Among his more acclaimed pieces are the Stations of the Cross at Christ the King Church. He also created the cross at the church, which measures almost seven and half feet tall.

Another carving of Maurille’s was on display at the Grand Coteau Centre last month as part of the “Visions of Eastend: Celebrating 100 Years” exhibition.

The show, which wrapped up in Shaunavon last week, is scheduled to tour locations in Saskatchewan and Alberta over the next year.

Maurille, 73, grew up in Rimouski, Quebec, not far from the Gaspé Peninsula and the province of New Brunswick.

His dad was a mixed farmer and the family lived near a heavily forested area. In fact, the carving featured in the Visions of Eastend exhibit is entitled “Logger’s Reward.” It depicts lumberjacks in action – exactly the kind of work that Maurille did when he was a young man.

Maurille developed an early love of working with wood.

“I’ve been doing this sort of thing since I was a kid – making hammer or axe handles for my dad,” he explained.

He picked up other work when he moved to Saskatchewan – he was a house painter and later a custodian at the high school – but he maintained his interest for carving. Wood sculptures were especially interesting to him as he loved to see the challenge that evolved from a simple block of wood.

Some of Maurille’s projects take several months to complete. The 14 pieces that make up the Stations of the Cross, for instance, took two years to finish.

Another of his wildlife scenes, this one featuring a moose roaming in the forest, took seven months to complete.

He often works between 6 and 8 hours a day on each project.

“They take a lot of time and you need a lot of patience to do this type of work,” he stated. “I have a lot of hours in some of these pieces.”

Maurille uses all kinds of wood for his carvings, from Balsam and maple to walnut and cedar.

“A lot of it is just firewood,” he smiled.

He creates his images using a variety of small delicate tools, dremels and chisels.

He rarely paints his art work.

“Sometime I might use a little colour for contrast,” he said. “But most of it is just the natural colour of the wood.”

A small room in Maurille’s backyard garage serves as a workshop, while another small nearby building is used to store and display his finished products.

Over the years, Maurille has welcomed thousands of visitors to the site. A guest book of visitors shows that people from across Canada and the U.S. – as well as many parts of the world – have toured the small shop and enjoyed the extraordinary artwork. Maurille has created over 200 pieces of art, some of which he has given away to friends and family members.

Maurille and his wife Alice have been married 48 years. The couple have four grown children living in different parts of the country (North Battleford, Regina, Ontario and Edmonton).

Now retired, Maurille has been creating his carvings since 1994.

With each new piece of carving, he challenges himself to see if he can do something better than the last time.

“You never know if you are going to succeed with each piece of art work, but you have to have the courage to start,” said Maurille.