Posted on February 3, 2015 by Shaunavon Standard 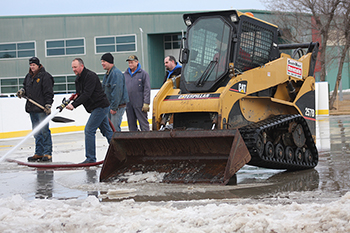 It took a small group of volunteers and town employees less than a day to erect the new Braydon Coburn outdoor skating rink at Jubilee Park.
“Things went very smoothly,” said Ron Phillips, Shaunavon’s Director of Parks and Facilities. “I think we were done by about 4:30.”
The work crew included Phillips, Kevin Szwetz, Derek Tremere, Dean McNabb, Cory Folbar, Kyle Bennett and Barry Sonen.
The effort also enjoyed the support of Southwest Rentals, which provided a skidsteer for the job, as well as the Shaunavon Fire Department, which provided a truck and manpower to clear ice from the site.
Southwest Terminal also made an important contribution to the project by sending a driver and trailer to Edmonton to pick up the rink materials and haul them back to Shaunavon.
Organizers originally planned to build the rink this past weekend, but moved the schedule up several days to take advantage of some unseasonably warm temperatures in the middle of the week.
Cooler temperatures over the weekend allowed crews to initiate the first floods at the rink and the facility should be open for skaters this week.
The new rink was named after Coburn as a way of honouring everything the NHL star has done for the community over the years.
Town council also passed a resolution to name the street leading up to the Crescent Point Wickenheiser Centre as Braydon Coburn Drive. The new street signs were erected last week.
The new outdoor rink is located on a section of concrete remaining from the old Jubilee Arena.
It covers an area just west of the skateboard park that was already being used for ball hockey.
The rink boards, purchased from a company in Edmonton that specializes in this type of equipment, are modular units that can be easily moved or reconfigured.
“We already configured it a little bit different than the original design,” said Phillips. “Instead of having both player box entrances on the same side, we actually moved one to the other side. That should provide a little more access for people entering and leaving the rink.”
The new rink will measure approximately 50’ by 82’.
“The boards aren’t as heavy duty as those in the (CPWC), but they aren’t designed that way,” said Phillips. “These are portable units, so you can move them anywhere. And if we want to make the rink bigger we can just order and add more boards.”
The new structure will replace the old outdoor rink which had faced its challenges in recent times. The rink’s dilapidated boards were removed several years ago.
The old rink is also located a considerable distance from the new CPWC.
When it was first constructed, the old outdoor rink had occupied a spot directly behind the Jubilee Arena. But now that the arena has been demolished, the outdoor rink sits on its own on the western edge of the Sportsgrounds.
“I know that even when we held a few community events at the old outdoor rink during the Centennial that it wasn’t the most convenient location and it wasn’t the most accessible for things like washroom facilities or just finding a place to stay warm,” said Bennett, who helped spearhead a fundraising drive to build the Braydon Coburn outdoor rink. “The new rink will be a lot closer to the Wickenheiser Centre and the concrete floor will make it much easier to maintain for the staff.”
The new rink will also have a more accessible water supply from the swimming pool’s maintenance room.
A large portion of the cost of the new rink was covered through several initiatives. For instance, proceeds from this year’s annual Braydon Coburn Summer Hockey School, which totaled $17,000, were directed to the project.
Another fundraising campaign raised over $6,000 with 13 different sponsors each making a $500 commitment to the rink.
Local businesses making $500 donations to the rink include Walter’s Home Furnishings, Red Iron Outfitters, Binkley’s Funeral Service, Harvest Eatery, B-Rev/Subway, Southwest Rentals, LTD., A & B Auto, Great Western Railway, Shaunavon Co-op, Cooper Plumbing, Overtime Restaurant and Sports Lounge, and Global Flow. Shaunavon Royal Purple also made a financial donation.
The sponsors will all have their names displayed on the outside boards of the rink and the facility will carry the name “Braydon Coburn Outdoor Rink.”
The new rink will not interfere with the skateboard park. In fact, the new boards and netting will actually help keep pucks and balls from leaving the area and rolling onto the streets or other parts of the park.
Officials also say that any future development at the skateboard park, which has turned into one of the busiest recreational facilities in the community, will not be affected by the new outdoor rink.
Jubilee Park has been the site of some major developments in recent years. The location encompasses an area that now includes a resurfaced tennis court, swimming pool, playground equipment, skate park and integrated sidewalks. The new outdoor rink will be an added feature.
Further upgrades are also expected at the site, including new signage, benches and garbage containers.
Town officials plan to hold a grand opening to celebrate the new rink this summer during the Braydon Coburn Hockey School.