Posted on June 9, 2015 by Shaunavon Standard 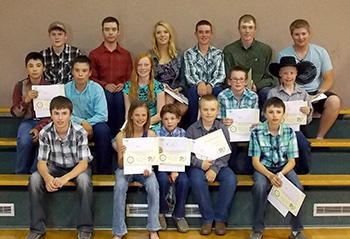 The Eastend School Gym was the site Sunday afternoon (June 7) from 3 to 5 p.m. for the Arnal Bursary Awards presentation where 15 young future farmers were awarded bursaries based on their own business plans to start-up their projects and work towards their futures.
Messages were read from MLA Wayne Elhard and Agriculture Minister Lyle Stewart; who both commended the Arnal Family on their endeavours and wishing all recipients the best.
Chantal (Arnal) Henderson and Olivia Arnal hosted the presentation awards and introduced those in attendance presenting the bursary and the recipients.
Olivia gave a brief history of her three brothers, Blake, Sean and Lyndon, and their keen interest in all things related to farming and ranching, and how focused they were on starting up and buying their own livestock.
“Growing up in the Southwest, they lived and breathed agriculture,” Olivia told the crowd on Sunday. “I spent years admiring the way Blake, Sean and Lyndon lived their lives to the fullest each and every day. There was not a moment in any of their lives where they allowed fear to discourage them from doing something. I never got the time to tell my brothers how truly proud I was of the young men they had become, but I am standing in front of you right now because I think our heroes need to be told how incredible they are.”
Recipients included: Austin Jacksteit, Fox Valley; Alishia Beach, Ernfold; Adrianna and Jorja Simpson, Kyle; Marty, Monty and Tyrel Bertram, Climax; Cam Blakley, Consul; Sidney Olson, Consul, Tylan Topham, Eastend; John Schock, Maple Creek; Tiara Armstrong, Eastend; Kyler and Carter Sayers, Kincaid; Tyson Anderson, Hazlet; Brady Scott, Eastend; Colton Shadlock, Bracken, Ariana Richardson, Eastend; Tash Armstrong, Eastend.
Bursary recipients came from across the Southwest and benefitted youth agricultural projects that ranged from geese and sheep to cattle and hens.
Also being presented were two special memorial bursaries.
Tash Armstrong was the recipient of the Blaine Sanford Memorial. Blaine, a young student from Frontier, died tragically in an accident earlier this year.
“I know Blaine was a hero to his parents, siblings, grandparents and friends in the way he approached and tackled life and someone we would like to honor and help his spirit alive,” Chantal said during Sunday’s ceremony. “Blaine had a love and passion for agriculture. Unfortunately, I did not have the opportunity to know Blaine but have only heard positive descriptions and stories about him. He is described the happiest most joy filled boy you have ever met. He had the most infectious smile and giggle. He was a hardworking young fellow who knew there was always work to be done.”
Meanwhile, Alishia Beach of Ernfold and Sidney Olson of Consul were the recipients of the John Moffitt Award. The Moffitt family attended the event to make the presentations.”
A number of special guests were on hand – all of whom had some connection to the Arnal Brothers over the years – to make individual bursary presentations.
Among the presenters were Ron and Donna Elder, Vern and Eileen Davidson, Marie Hanson, Ken and Corrinne Hassett, the Moffitt Family, Dylan Arnal, Anne Arnal, Matt Jones, Olivia Arnal, Chantal Henderson and Les Giesbrecht.
“This is an incredible legacy you are passing on,” Donna Elder told the Arnal family.
“This is the most humbling experience for me,” said Anne Arnal, the boy’s mom, alluding to the extraordinary support the family has received, as well as the large number of bursary applications and the variety and entrepreneurial nature of the requests.
The total for the bursaries given was $45,181. Fifteen different young students were the beneficiaries of that funding help.
“They say Disneyland is where dreams come true, it is actually here at Eastend School today,” stated Olivia. “We would like to congratulate each applicant and best of luck with your projects.”
There were some emotional moments as those presenting related stories about the boys and the affect these young people had on those they met during their time with us.
There was a good crowd in attendance to see these young people realize their dreams and to wish them well in their endeavours.
The bursary was open to individuals between the ages of eight and eighteen years of age.
Applicants were asked to provide a business plan for their entrepreneurial ventures or education including the cost, goals and the overall plan for the endeavor.
Originally, the family was hoping to disperse up to $3,000 a year through the bursary fund, but support for the project was so generous that organizers had to recalculate their plans.
The Arnal Brothers Memorial Bursary will continue on an annual basis.