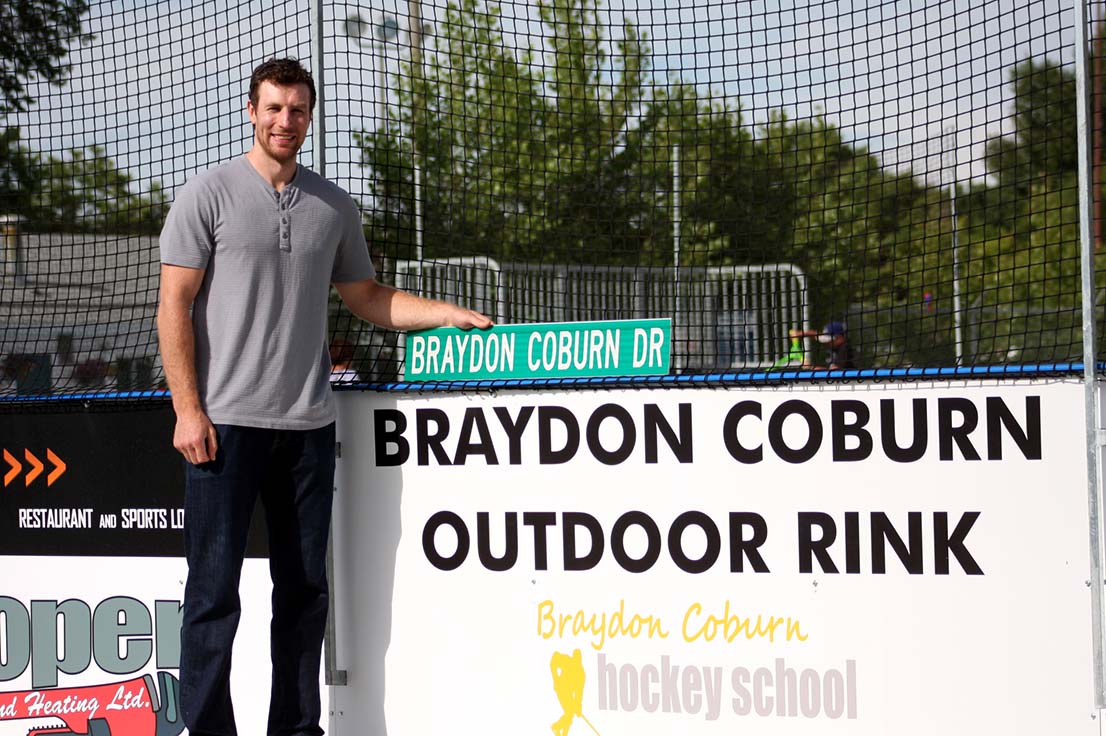 The town of Shaunavon paid tribute to a local athlete who has gone on to reach the highest levels of his sport but has not forgotten his Southwest Saskatchewan roots and continues to make a generous contribution to his former hometown.
NHL star Braydon Coburn was honoured with a special event on Wednesday that saw the official grand opening of the community’s new outdoor rink – which has been named the Braydon Coburn Outdoor rink.
Officials also presented Braydon Coburn with a sign commemorating the town’s move earlier this year to name the street leading up to the Crescent Point Wickenheiser Centre as Braydon Coburn Drive.
“We just wanted to do something to acknowledge Braydon’s contribution to the community,” said Riley Kornfeld, a Shaunavon town councillor and the chairman of the Wellness and Leisure Committee. “Braydon has done so much for the community of Shaunavon that it was nice to give something back to him.”
“We’re pretty fortunate to have someone like Braydon,” he added. “To have an NHL player come back home every year and give up a week of his summer is pretty incredible. Especially when you consider how long the NHL hockey season is now and the fact that he has a young family himself. Plus he’s the nicest guy you would ever want to meet. He seems to have time to chat with everyone.”
For his part, Braydon admitted that he was “taken aback” when first informed about the town’s decision to have a street and the outdoor rink named after him. It came as a complete surprise to him and wasn’t sure he deserved the honour. Only after talking with people like Kornfeld, and Shaunavon mayor Sharon Dickie, did he feel comfortable with the idea.
“It’s a big honour for me and humbling,” he stated. “It’s not something you ever expect, but its touching and very special to me and my family.”
Braydon, who lived in a house in Shaunavon less than a block from the new outdoor rink – and was once the site of the community’s old Jubilee Arena – fondly recalls his own outdoor hockey experience. For those around long enough to remember, it wasn’t unusual to see Braydon patrolling the streets of Shaunavon during the summer months in his roller blades as a part of a disciplined regime he followed even as a youngster.
“It’s kind of neat to think about that now,” he recalled. “I spent a lot of time at the tennis courts and played a lot of street hockey and roller hockey. I was just trying to do as much training back then as I thought it would take to be a professional (hockey player).”
He also laughed that the new Braydon Coburn rink – a structure built from materials acquired from a company in Edmonton that specializes in these types of facilities – is pretty impressive compared to the hay bales that would sometimes be used as walls at the old outdoor rink in Shaunavon that he also frequented.
Shaunavon mayor Sharon Dickie also had a few recollections during her presentation at last week’s ceremony. Dickie acknowledged Braydon’s two grandfathers – Gordon Skjerven and Gerald Pickel (both now deceased) – and the important role they played in his early development. Gordon was a legendary athlete and coach in the Southwest while Gerald was a prominent businessman and Shaunavon alderman.
Dickie, who knew the men and served with Gerald on council for a period of time, said they would both be extremely proud of Braydon today and everything he has accomplished.
The Braydon Coburn rink was actually erected earlier this winter. It’s been a popular site for outdoor hockey enthusiasts and you can find kids at the rink at any time of day or night. In fact, the whole Jubilee Park area has been attracting large numbers of youth and families over the past few years with the playground equipment and the extremely popular skate park, and the Braydon Coburn rink has only added to that active environment. The tennis courts and swimming pool are also part of the property and the Crescent Point Wickenheiser Centre sits nearby.
“It’s great to see so many kids use the facilities,” said Ava Kalaschnick, the town’s director of Wellness and Leisure. “That’s the reason these structures were put in place – we want to help promote youth and families to be active and to give them facilities that will help them do that.”
During Wednesday’s ceremony, Braydon also alluded to his recent experience in the Stanley Cup finals. Braydon had been traded earlier in the season from Philadelphia to Tampa Bay as the Lightning loaded up for a strong playoff run. Ultimately, however, the team fell to the Chicago Blackhawks in a six game series. It was the second time he had been to the Stanley Cup finals, as the Philadelphia Flyers also lost to the Hawks in 2010.
Braydon said it would have been great to bring the Cup back to Shaunavon during the summer hockey school.
“But I still have a few years left in me and hopefully I’ll get a few more tries,” he smiled.