Posted on August 18, 2015 by Shaunavon Standard 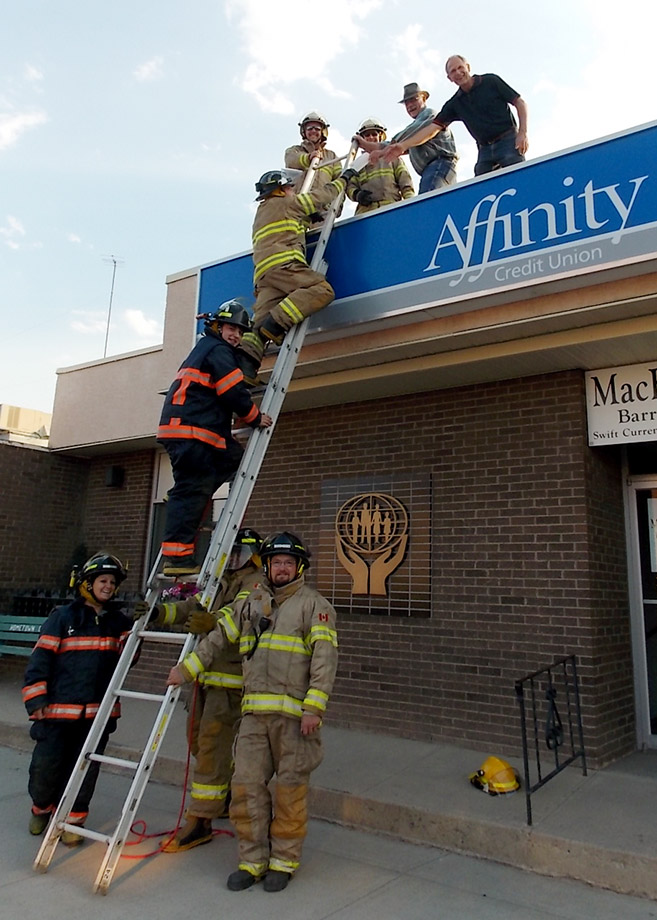 Thanks to a generous donation from Affinity Credit Union, the Shaunavon Fire Department will soon be adding an important new piece to its emergency response equipment.
The fire department recently learned that it had been approved for an Affinity Credit Union Community Development grant. The funds will go towards the purchase of a new trailer that can be used as a command centre for a wide range of emergency events.
Affinity is contributing $15,000 to the project.
“When we first identified this (the trailer) as something that we could use, we started kicking around ideas about how we might raise the money,” said Shaunavon Fire Chief Dean McNabb.
“It would have taken a lot of bake sales to come up with that kind of money ,” he added with a laugh. “We thought we would be fundraising for a while. But the $15,000 from Affinity will cover 90 per cent of the cost of the trailer.”
Fire Department officials now hope to have the new unit here sometime this fall.
The 24 foot trailer will be insulated and wired, while also including features such as air conditioning and electric heat.
The unit will also be rigged with items such as radio equipment and the fire team is considering the option of adding a small, simple washroom to the structure. McNabb says the trailer will serve as a command centre for scenarios ranging from Emergency Measures Organization (EMO) events to large scale fires.
It can also provide some respite for firefighters who are facing extreme weather conditions. In fact, over the years, local fire crews have responded to a number of emergency incidents where they have had to endure dangerous temperatures – with no place to rest and warm up or cool down.
The trailer could even be used for simple tasks such as scene security when firefighters are required to stay at the site even after a fire has been extinguished, but there are dangers of flare ups.
“It’s also something that could easily be brought out to other communities to assist with large grass fires or other incidents,” added McNabb.
The fire department’s one-ton truck would be used to haul the trailer.
Other than the initial purchase price, there should be no other big costs associated with the unit.
“This has four tires – there isn’t a ton of maintenance that will be required,” he stated.
The $15,000 cheque presentation was made by Affinity district council members Robert Anderson and Ted Anderson.
Every three years, Affinity distributes a total of $50,000 to each district – on top of its other donations – with the local council determining where those funds will be donated.
Robert Anderson, in a brief speech following the cheque presentation, praised the local fire crew for the great work they do throughout the year. He also said that the local Affinity council members were excited to see the money go to such a worthy cause.
“This is absolutely great to have the Credit Union step up for us like this,” said McNabb. “We are extremely grateful for the donation.”